Cycle with both arms and legs

When we look at a cyclist cycling on his bike, we notice how easily the bike moves at the rear. But at the front the bike is static. In order to make fuller use of the bicycle, the handlebars can be combined with a drive system to make a tandem.

The handlebar contains a patented mechanism that allows upper body ‘pedalling’ and steering to be combined. The front drive system also incorporates a steering stabilizing mechanism. The crankshaft has a special freewheel system that allows the bike to be cycled with both arms and legs or with the legs alone while getting on and off the bike. The 4 Strike Bike has also a second handlebar with a brake, a normal handlebar, in a higher position during cycling. Transforming this bike back into a regular bike. This ordinary bicycle function is the basis of the 4 Strike Bike.

This modern bicycle is a faster way of transport on the road, and the bike can be adjusted to suit different traffic situations and personal preferences.

BE FASTER, USE ARMS AND LEGS 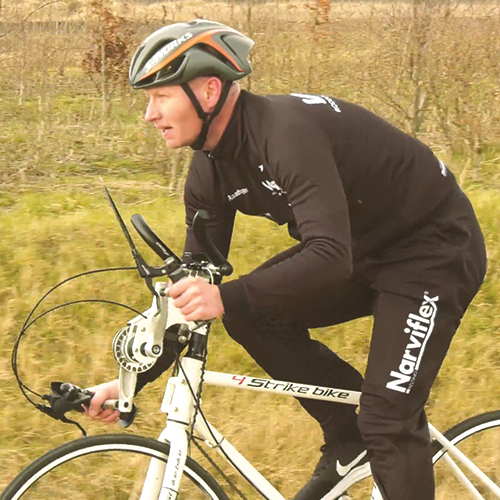 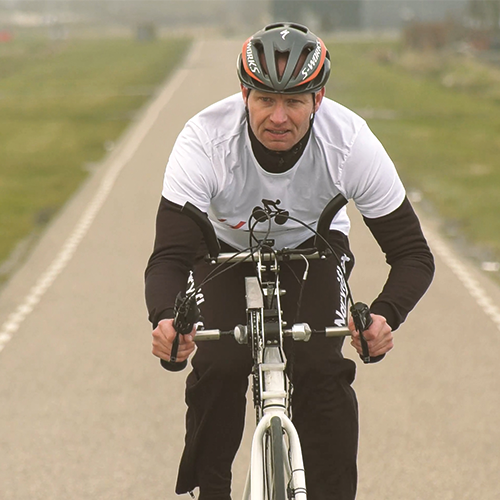 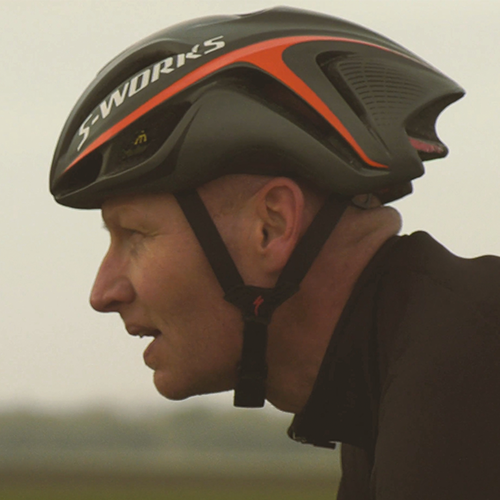 Making use of gravity, the weight of the upper body is shifted alternately from the left handle to the right handle and back. The gravitational force of the upper body weight brings the handles and the crank into motion. The handles push and pull on the central crank set of the bike, moving the bike forward.

Cycle with arms and legs together and steer surprisingly good with your hands on the handlebar with revolving cranks. You can control your front wheel very accurate, even in a sharp bend in the road. Steer and revolve the driving cranks at the same time and be a master of the bike with your legs and arms.

The 4 Strike Bike has adjustable ‘peddling’ handlebars and can be used as an ordinary city bike in traffic as well as a touring bike for longer distances at higher speeds. It is a much better and more practical means of transport, if you are in a hurry.

Work out your entire body

More fun to ride your bike

There have been several strangely powered bikes on the market involving separate use of the arms by the rider while seated upright but not resulting in a harmonious cycling motion. There are bicycles with a drive on the front wheel, whereby a non-synchronous, non-parallel, unnatural movement of the arms and legs occurs.

Other designs have the handlebars at chest height with the rider seated upright. Here the rider pulls on the handlebars without the use of the weight of the upper body and without synchrony between shoulders, torso and hips, with low back pain as a result.

The 4 Strike Bike makes use of quality materials and technology and is more versatile, so that this ‘total’ bike can be made to high quality standards and engineered to withstand intense use.

4 STRIKE CYCLE
HOW DID THE IDEA ORIGINATE?

“I developed troublesome back and shoulder complaints from years of performing lengthy surgical operations while standing with a bent and crooked posture. To recover from and prevent these problems, I came up with the idea of ​​this bike. I then designed and built the first bike and began to use the 4 Strike Bike successfully. Over the past 5 years I have experimented with several prototypes that hundreds of enthusiastic people have now cycled on.

As slow walkers we pedestrians can’t do without our bikes and cycling has become a sort of ‘second gear’. If we don’t allow a rigid handlebar to suppress the natural feeling of wanting to move our arms together with our legs, but enable them to cycle as well, then we can shift into a ‘third gear’. We have now constructed a bike that you can cycle almost as if you were four-legged, assuming a more horizontal position and with harmonious movement along the shoulder and pelvic girdle. As well as steering, the hands now move with the feet in an alternate parallel pedalling movement using all 4 limbs to create more speed.

With the use of more muscle power from the combined use of both upper and lower body, more muscular work is performed and the effort more equally distributed; this is healthier for heart, better for aerating the lungs and prevents undercooling of the upper body in rain and cold. You’ll have more fun on this revolutionary new bike.”

The bike is produced by Minq Engineering B.V. in Lichtenvoorde

WHY IS THE 4 STRIKE CYCLE GOOD FOR YOUR HEALTH?

Cycling the 4 Strike Bike makes active use of more different muscles and the use of arm and torso muscles aids breathing, leading to better aeration of the tops of the lungs. The heart has a more balanced workload, now supplying blood to muscles in both upper and lower body.

The 4 Strike Bike gives you a total body workout, generates upper body warmth, aids ventilation, and leads to total body fitness. In sport, the 4 Strike Bike will be valuable as an exercise bike. In many sports you can see the same pattern of movement as used when riding this bike. In the rehabilitation of heart, lung, torso and back complaints this bike is an ideal tool to aid physical recovery.

On a regular bike about 50 muscles are in active use whereas the 4 Strike Bike requires the active use of 128 muscles and an increase of the collaterals lowers the blood pressure.

Cycling the 4 Strike Bike is fun because you no longer have to sit with your arms motionless, they can help cycle as well. You can vary your cycling, using your arms actively or just to steer as you wish during recreational cycling. It’s also a fun bike for children to ride.

Interested in our product or do you have questions? Feel free to contact us via the contact form below. We will inform you as soon as possible.