The Idea Behind The 4 Strike Bike

When we look at a cyclist cycling on his bike, we notice how easily the bike moves at the rear. But at the front the bike is static. In order to make fuller use of the bicycle, the handlebars can be combined with a drive system to make a tandem.

The handlebar contains a patented mechanism that allows upper body ‘pedalling’ and steering to be combined. The front drive system also incorporates a steering stabilizing mechanism. The crankshaft has a special freewheel system that allows the bike to be cycled with both arms and legs or with the legs alone while getting on and off the bike. The 4 Strike Bike has also a second handlebar with a brake, a normal handlebar, in a higher position during cycling. Transforming this bike back into a regular bike. This ordinary bicycle function is the basis of the 4 Strike Bike.

This modern bicycle is a faster way of transport on the road, and the bike can be adjusted to suit different traffic situations and personal preferences.

Why is this cycling posture desirable?

Making use of gravity, the weight of the upper body is shifted alternately from the left handle to the right handle and back. The gravitational force of the upper body weight brings the handles and the crank into motion. The handles push and pull on the central crank set of the bike, moving the bike forward. 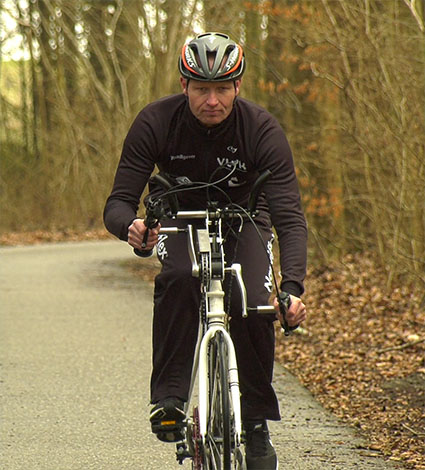 Propelling the bike is a constant fluid process requiring the use of body strength in a smooth alternating fashion from left to right and from front to back and vice versa. This effort requires energy, which is released during the combustion process of ATP in muscle cells. The more muscle power available, the greater the combustion capacity and the energy that can be supplied, generating higher speeds.

If the whole body is brought to bear in the cycling process and is used to provide the energy for motion, as with four-legged animals, then the load on the body is more naturally distributed. This means that the rider is more in control of the bike at higher levels of total body exercise. Cycling with the arms initiates cycling with the legs and allows for smoother propulsion, with a less shock-like initiation of force when pedalling through the dead points (the highest and lowest positions of the pedals).